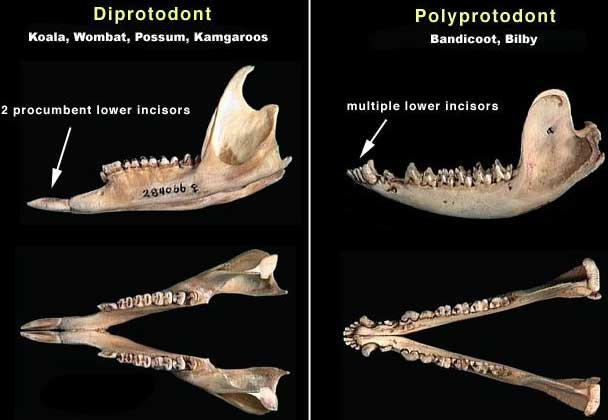 Not only sharing its habitat with possums, but also its distant ancestry the Lumholtz's tree-kangaroo belongs - like all kangaroos and possums - to the marsupial orderof Diprotodontia - they all have only two(di-) incisors that are protruding(-proto-) teeth(-dontia) at the front of their lower jaw. View: Kangaroo (Macropod) Systematics (67kb .pdf)

Further down the taxonomic level, tree-kangaroos, being proper macro-(big) -pods(foot), i.e. kangaroos, are therefore placed in the family Macropodidae. Therein the latin term for the tree-kangaroo genus is Dendrolagus, meaning tree-(dendro) -hare(lagus). In tandem with the genus name the scientific species name in the Lumholtz's case is: Dendrolagus lumholtzi.

Kangaroos started to evolve from possum-like ancestors that lived in the trees (i.e. were arboreal) about 50 million years ago. Evidence for this ancestry is still present in the most primitive kangaroo, the Musky rat-kangaroo. Although ground-dwelling its hind foot still features a 'thumb-like' toe, resembling that of a possum's foot and lacking in all other kangaroos.

Tree-kangaroos supposedly evolved from kangaroos that led a terrestrial (living on the ground) lifestyle. As to why they "re"-turned to arboreality (life in the trees) no-one knows. Recent DNA research suggests a closer relationship of tree-kangaroos with rock-wallabies (genus Petrogale) than with any other macropods and therefore they are conceived as sister groups within the macropods. This and the rock-wallabies' capability to master rocky terrain and even small leaning trees might present a hint towards a relatively early split of a tree-kangaroo/rock-wallaby ancestor from the main kangaroo lineage.

View: Evolutionary timeline of the Kangaroos (tracing the tree-kangaroo line).

Both Australian species are listed as rare under Queensland's Nature Conservation Act. Both live in the rainforests of the Wet Tropics bioregion of North Queensland, Bennett's from about Cooktown south to the Daintree River, including the Mt Windsor Tableland, and Lumholtz's from the Daintree River south to the Herbert River gorge. They may overlap with each other on the Mt Carbine Tableland inland of Mossman. View: Tree-kangaroo distribution map

Bennett's tree-kangaroo can be found on the coastal lowlands as well as the ranges, and extends along riparian strips into drier eucalypt forest.

Despite being recorded to have been common in lowland rainforests prior to large-scale clearing of its lowland habitat the Lumholtz's tree-kangaroo is rarely seen below300m altitude and its highest densities now occur in complex rainforest on basalt soils of the Atherton Tablelands (750m-1100m). Nevertheless there are populationsin the tableland's less complex rainforests on poorer soils as well as in wet sclerophyll forests (i.e. eucalypt forests - still relatively wet, but drier than rainforest and with a rainforest understorey) on the western fringe of the Wet Tropics bioregion and in riparian vegetation (rainforest species) along watercourses throughout the region. 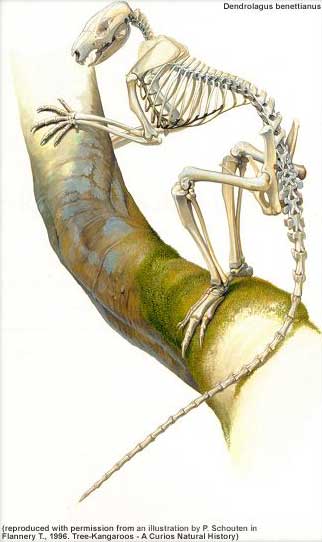 Tree-kangaroos feature some distinct body characteristics which enable them to live in trees, unlike their ground-dwelling kangaroo cousins. These include: their exceptionally long, pendulous tail facilitating balance; stronger forelimbs, shorter and broader hind feet, longer, curved claws on feet/paws and spongy soles/'palms'- all features that help with balancing and gripping and therefore climbing. View: Lumholtz's Tree-kangaroo Measurements Infosheet

The teeth are adapted for 'shearing' leaves rather than 'grinding' grass. Tree-kangaroos are medium-(to large)-sized mammals with females featuring a forward-opening pouch (marsupium) containing four teats - a 'secondary womb' for young, that are being born as foetuses, completing their development there. The Bennett's tree-kangaroo is one of the largest tree-kangaroo species, whereas the Lumholtz's is one of - if not the smallest. View Lumholtz's Tree-kangaroo Skull, Jaw and Teeth

The Lumholtz's tree-kangaroo's face, head, back of ears, neck, shoulders, upper back, upper forepaws, upper hindfeet, undersurface and terminal third of the tail are blackish-brown. The lower back is sprinkled with lighter coloured fur. They have a 'sweat-band' of lighter, yellowish-grey fur across the forehead, down the cheeks and on the throat. The ears are short and rounded. The under-surface of body, inside of legs and outside of lower legs is also yellowish-grey. Sometimes there is a bare patch at the base of tail where the animal sits on. Juveniles and sub-adults have a pronounced tuft on the tail. Males seasonally have an orange flush of colour (varies greatly between individuals) on the belly, inside and outside the lower half of the thighs.
(paragraph reproduced and modified with permission from Johnson, P., 2003. Kangaroos of Queensland.)

Bennett's is distinguished from Lumholtz's by the lack of contrasting pale forehead and tail markings. The area of distribution-overlap between the two species (Black Mountain Corridor area) is apparently very small, and only very few people ever saw the two species at the one occasion.

All kangaroos and wallabies are foregut fermenters (i.e. they break down their food in the first part of the stomach), but notably the tree-kangaroos are the only marsupial arboreal folivores (browsers) that ferment their browse in the foregut. They don't feed on Eucalyptus foliage, which is high in certain toxic compounds and can only be utilised by hindgut fermenters, e.g. possums and the Koala.

The Lumholtz's tree-kangaroo is primarily a leaf eater, but also consumes fruits and flowers from quite a wide variety of native rainforest trees and vines, as well as leaves, fruit and seeds of a range of non-native plants. Lumholtz's tree-kangaroo has also been seen eating citrus leaves, passionfruit and other garden plants. It is also known to feed on the leaves of wild tobacco and lantana, both invasive weeds.

Latest research has found that the Lumholtz's tree-kangaroo's activity pattern is not purely nocturnal as previously thought, but 'cathemeral', meaning 'intermittently active throughout the 24h period'. During the relatively brief sleeping bouts of almost up to an hour the animal's head simply sinks on the chest or even down in between the feet - like in the group's logo - , depending on the animal's position on a branch, in a fork, a vine tangle or sometimes even on top of tree-ferns. On cool mornings, the animals appear to 'sunbathe' in the top of the canopy. this behaviour is much like that seen in lemurs

The Lumholtz's tree-kangaroo does not use tree hollows or builds nests for sleeping.

Living arboreally (in the trees), it is a good 'tree climber' (also another local term for the animals) with very sharp, strong claws, powerful forelimbs and a mixed quadrupedal/bipedal (four-limb/two-limb) locomotion.

Capable of moving its hindfeet independently, i.e. walking, tree-kangaroos are the only kangaroos that can move backwards - essential to get around in a dense, three-dimensional habitat. It uses its long, but not prehensile ('gripping') tail as a counterbalance - maybe the reason for its length, given the considerable weight of the animal.

It can not curl its tail around branches (like some possums do) and descends from trees in a sliding fashion, tail first and then jumps off the trunk, sometimes already from up to 10m! On the ground the primary locomotion is a bipedal hop or walk for fast and slow movement respectively. Very short distances can also be mastered quadrupedally.

The area a Lumholtz's tree-kangaroo lives in is not called a territory, but a home range, because territories in biological terms are areas that are actively defended/patrolled, which this species does not do. The notion that the home ranges of Lumholtz's tree-kangaroos are maintained primarily by scent marking rather than by sheer physical presence seems to be true at least for females.

Adult males might confront migrating subadult males when encountered while crossing the resident's home range. In regrowth rainforest fragments male home ranges are reported to average approximately 2ha in size, whereas a female occupies around 0.7ha of habitat. Female home ranges are always and almost completely located within the resident male's home range, but exclusive (non-overlapping) of other female's (although mothers and daughters might share parts of their respective home range, if the daughter didn't disperse during maturation).

Lumholtz's tree-kangaroos appear to live in 'relatively loose' reproductive units of 3 to 5 adult individuals, consisting of one resident male and several females. These units are aptly being labelled 'harems'. Notwithstanding subadult and at-foot offspring live amongst the adults. In regard to their respective adult same-sex peers, both sexes maintain exclusive home ranges (a bit less than 1ha for females and about 2ha for males)./

However, the male home range overlaps with those of all females of the harem. Being intolerant of individuals of the same sex results in a relatively solitary lifestyle. Nevertheless, on average a resident male visits each of 'his females'' home range every 3rd to 4th day, coming relatively close to the female (approximately within 20-30m), but rarely closes in to more direct contact (in touch or within 10m). The only continued close-contact social interactions appear to be courtship prior to mating, mating itself and mother-offspring interactions.

If two similar-sized animals are seen together, most likely it is a female and its last year's offspring at foot. On occasions though, it might be adult male and female, but almost certainly never adult same sex pairs. In the case of three animals present, very likely it would be a mother with this year's and last year's offspring. Notably, close encounters - and even touch-contact - between resident adult males and male offspring have not been observed to be aggressive.

Marsupials have a unique method of reproduction in which the young is born in a very undeveloped state. It is then suckled, usually in a pouch, which it vacates gradually as it develops and becomes more independent in feeding and moving. It finally reaches adulthood only after having permanently vacated the pouch.

In their reproductive mode, tree-kangaroos are quite extreme as far as marsupials are concerned. They display one of the longest marsupial offspring development/maturation periods and, if compared with similar-sized marsupials, they have the longest.

Not much is known about their reproduction in the wild. The only published data is from captive animals at QPWS facilities at Cape Pallarenda, north of Townsville. However, very recent field research (yet unpublished) aims to shed some more light on things in the wild and personal communication thereof is in parts presented below.

It is not known for sure if they mate and give birth only at certain times of the year, i.e. if they have a seasonal reproductive pattern. At least in captivity they show a kind of seasonality, as most young are born during the wet season. Recent research from the wild suggests a similar pattern. In addition there are records from wildlife carers of orphaned young that must have been born at different times of the year. In concordance with the ecological paradigm of arboreal folivores having a low overall reproductive potential, Lumholtz's tree-kangaroos have been found to produce about one young per year.

The fertile period of female tree-kangaroos (oestrous) in general is estimated to be about 2 months (approximately a bit less than 60 days). In captive Lumholtz's tree-kangaroos the oestrus cycle ranged from 47 to 64 days.

Ending gestation, one young (weighing only a few grams) is born and it takes the foetus less than 5 minutes to crawl just with its forelimbs (hind limbs are just beginning to develop) to the pouch entrance. In the pouch it (permanently) attaches to a teat and continues to develop for about 3 months.

At 3 months old, weighing about 100 grams, hair starts to grow, and at 4 months of age they open the eyes. First emerging from - but not leaving - the pouch at about 5 months old, they then gradually cease returning to the pouch from foraging over the next 3 to 4 months. In captivity they vacated the pouch permanently aged about 8-9 months. At this point a considerable growth 'explosion' was observed until the offspring was weaned at an age of about 13 months. From recent research in the wild it is estimated that they accompany the mother for another year (subadult males might stay in the mother's home range even for up to yet another year) before they start to find their own area to live and reproduce, i.e. disperse.

Tree-kangaroo Photo Galleries - © TKMG 2004 to present. Please remember: There is copyright on every picture. Commercial reproduction is only allowed with written permission of The Tree-Kangaroo and Mammal Group Inc.!

Click here to report a dead or injured Tree Kangaroo