The project is currently underway to learn more about the population of Lumholtz's tree-kangaroo and it health status.

The project is being conducted by Roger Martin and Dr. Amy Shima.

They can be contact via email: treekangaroo.study@gmail.com or telephone 0499 180 961

The project is looking at 3 major facets. Mortality, Population and Health.

1. If it is safe to do so, please move the carcass off the road (so it doesn't get run over again) and leave it on the side of the road.

Once we get a report of a dead tree-kangaroo, we go to retrieve the carcass so a post-mortem examination (necropsy) can be performed and data collected.

For further information on reporting a dead or injured tree kangaroo using this page: Dead or Injured reporting page

How to identify whether a road-kill is a tree-kangaroo

How can you tell if a road kill is actually a Tree Kangaroo? Sometimes wallabies or even possums can be mistaken for a tree kangaroo. While we will go check out any report of a dead tree-kangaroo, it will really help us out (and save us time and energy) if you take a few moments to learn about the identifying features of a tree-kangaroo compared to a wallaby or possum. 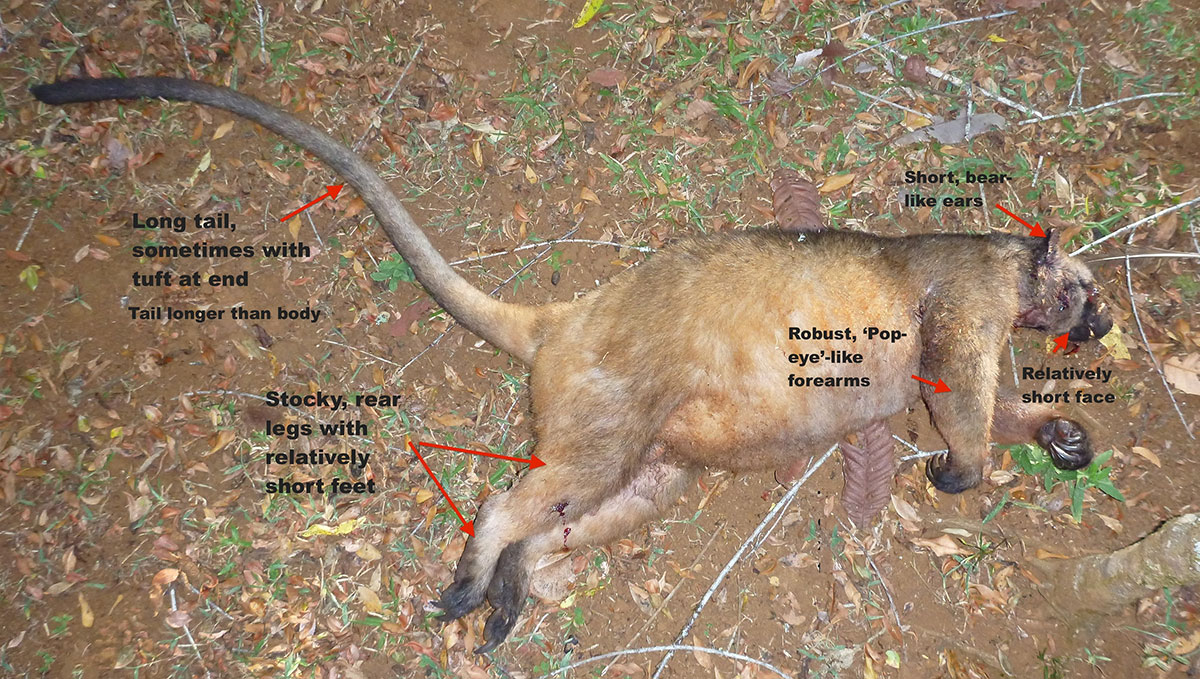 This project is gathering information on the population of Lumholtz's tree-kangaroo. Data being collected will help us establish the current status and trends in the population. To put it simply, we are trying to find out whether the number of tree-kangaroos is stable, decreasing or increasing. To understand what is happening to a population, we need to know how many animals it contains (the density of the population) and whether its numbers are increasing or decreasing. To establish whether the population is increasing or decreasing, we need to know the birth rate and mortality (survival) rate of the population. Figuring out the birth rate of a population involves learning about the reproductive biology of the animal. This includes establishing whether breeding behaviors are limited to a particular season; the age at which females start to reproduce and the interval between births and the survival rate of dependent young (1-2 year olds), particularly females.

Population biology studies require that animals be followed over a long period in order to gather the information needed to be able to analyze what is going on with the population. Our study is still in its early stages. It is the first study to look at tree-kangaroos over a wide range of habitats rather than focusing on a population living in a single area.

The health status of Lumholtz's tree-kangaroo has never been investigated but is currently the subject of a PhD project. The project aims to establish baseline medical information about the species, survey for infectious diseases, investigate what impact humans and their animals may be having on tree-kangaroos (and vice-versa) and investigate road and predator mortality with the hope that information gained may be useful in future management decisions about the species and in advising veterinarians and wildlife carers about typical injuries sustained from vehicles and predators with the aim of improving animal welfare and reducing suffering.

Click here to report a dead or injured Tree Kangaroo